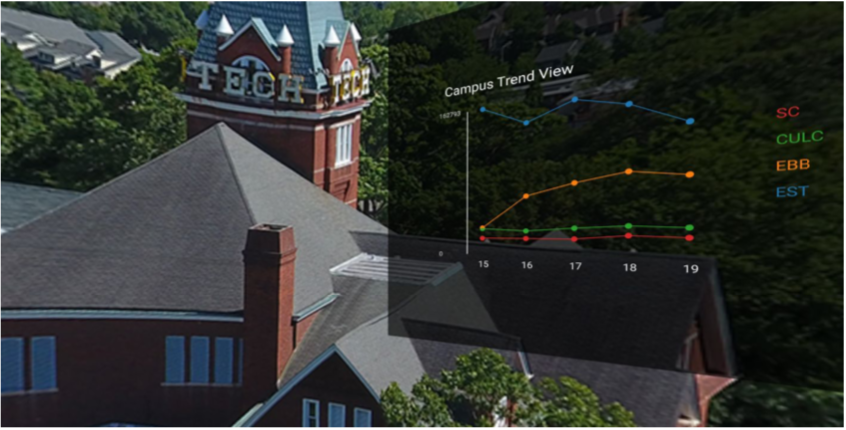 Georgia Tech has multiple ongoing sustainability initiatives involving energy usage and carbon emissions. Representatives of the Office of Sustainability and Facilities Management introduced us to a few of these initiatives, including sustainability certifications, the Board of Regents’ ‘Yellow Book’, and solar energy use on multiple buildings throughout campus. Clough Undergraduate Learning Commons building (CULC), for example, is equipped with 360 solar panels. The building is also equipped with daylight harvesting and motion sensors to detect light levels in common areas inside of the building to create a more efficient lighting and HVAC settings. CULC is one of the 23 buildings on Georgia Tech’s campus that is also LEED certified. LEED (Leadership in Energy and Environmental Design) is an internationally recognized program for green building certification. Multiple levels of LEED certification are met on GT’s campus, and of the 23 buildings built between 2003 to 2015, all are silver-level certification or higher. In terms of carbon emissions, GT has found ​roughly 8% of gas emissions per 1000 sq. ft. to be reduced since 2011 [1]. This was a major accomplishment due to Georgia Tech’s demand for world class research and lab facilities.

Equipped with goals to bring awareness to campus sustainability initiatives and offer an engaging platform to interact with energy usage data on a building-level, we wanted to develop an interactive, augmented reality prototype to display usage data outside of each building so to create an energy usage walking tour of the campus. We received a good amount of data from our partners in Facilities Management and we used these data to design multiple visualizations of energy usage on a building-level.

We received commodity data for four major buildings on Georgia Tech’s campus, CULC, Engineered Biosystems Building (EBB), Ford Environmental Science and Technology Building (ES&T), and the Student Center, in the form of high-level executive summaries, aggregated and graphed together, as well as an excel file of each building’s commodity usage data and Energy Use Intensity (EUI) trends data broken down by month. We created visualizations that displayed a building-level comparison, as well as a commodity-level comparison.

The final output of the project is a detailed and comprehensive proof of concept in the form of a prototype. We’re excited about the opportunities to scale this project to incorporate multiple buildings on campus, as well as add both in features and functionality to make the experience richer and more engaging. We will discuss both additional features and functionality, as well as future work we would recommend for the project if it were to be continued.

We developed a Web-based AR prototype designed primarily for mobile devices. Our dataset was primarily a time-series including one temporal attribute (Month) and three quantitative attributes (consumption values for Natural Gas, Chilled Water, and Electricity). We initially tried visualizing the entire dataset (Figure 1) incorporating all metrics at a monthly scale. However, given the space constraint accompanying mobile devices, we experimented with different aggregation levels including quarters, semesters, and years, ultimately deciding that years was the best aggregation level to give an overview of the data on mobile devices.

Given the context of a time-series dataset, the prototype supports two primary views: a ​Trend View ​and a Compare View.

The trend view enables observing changes in: (i) total energy consumption values across campus buildings and (ii) energy metric values for individual buildings. Following recommendations from prior work on perceptual and task-based effectiveness of different graphical encodings [1–4], we use multi-series line charts as the primary visualization technique in the trend view. Figures 3 and 4 show screenshots of the trend view at a campus-level and for Student center between Jan 2015-Nov 2019, respectively.

The compare view enables observing raw values and comparing values for: (i) total energy consumption values across campus buildings and (ii) energy metric values for individual buildings. Following recommendations from prior work on perceptual and task-based effectiveness of different graphical encodings [2–5], we use grouped bar charts as the primary visualization technique in the trend view. Figures 5 and 6 show screenshots of the compare view at a campus-level and for Clough Undergraduate Learning Commons between Jan 2015-Nov 2019, respectively.

The final prototype is implemented as a HTML application using the A-Frame web framework. A combination of D3.js and jQuery is used to bind data to A-Frame objects and add objects (e.g., rectangles, lines, text) to the scene. We use images of the Georgia Tech campus and the different buildings as the view background to emulate in-person viewing of the campus buildings through a mobile camera as we were unable to go on campus in-person.

We found as we were communicating with sustainability subject matter experts, we would not be able to design an experience that calculates the carbon footprint of buildings, however, if desired, this is something that could be looked into for future work, and displayed in an AR web application. The team would need not only the building’s operational usage data, but also data from personnel who are frequently using the building, like mode of transportation, and travel schedules.

[2] Cleveland, William S., and Robert McGill. “Graphical perception: Theory, experimentation, and application to the development of graphical methods.” ​Journal of the American statistical association​ 79, no. 387 (1984): 531–554.