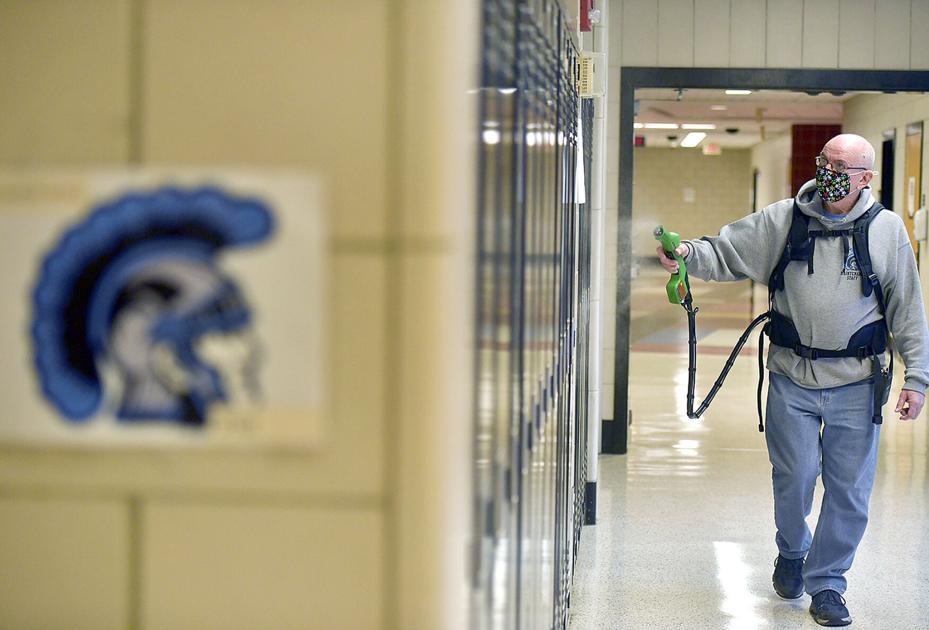 Armed with an updated arsenal of cleaning supplies, disinfectants and equipment, Greater Johnstown School District Physical Plant Director Don Diamond said he and his crew have worked hard to battle the novel coronavirus.

“My guys have been doing an excellent job,” Diamond said.

Since the beginning of the academic year, the custodial staff at Greater Johnstown has dealt with more work and risk due to the COVID-19 pandemic. Their responsibilities significantly increased when the students were in the building, Diamond said. But since the move to remote learning, the workload has become more manageable, he said. His daytime crew still sprays and wipes down high-touch areas two to three times per day because teachers are in the buildings.

In addition to daily sanitation efforts, custodians are also the first to respond to suspected COVID-19 cases reported in any of the schools. Diamond said that’s a worrisome task but one his crews take in stride – entering a class after being alerted to the situation and sanitizing surfaces inside.

Robert Mowry, maintenance supervisor for Westmont Hilltop Elementary School, shares a similar concern. “It’s a job,” Mowry said. “You’ve got to do it.”

‘Anything you can touch’

Crews in both districts don masks and gloves and use sprayers with Ecolution disinfectant to sanitize buildings – from bathrooms and doorknobs to chairs and desks. In most instances, electrostatic sprayers – purchased by the districts prior to the school year – are used to sanitize hard surfaces. “Anything you can touch we have to attend to,” Mowry said. These devices expel charged droplets that coat and wrap around an object.

At night, staff members go through the buildings and spray down entire rooms again while also continuing routine cleaning, such as dusting, vacuuming and mopping.

Diamond said what’s helped him manage the situation is Jackie Sapolich’s assistance. She’s been employed by Greater Johnstown as a cleaner for years, but in August was promoted to shift supervisor for heavy duty cleaners. Sapolich’s job is to make sure all disinfectant efforts are completed in the evening. She goes from building to building and checks in with the crews at each school. Sapolich said she feels safe that the evening group has been doing their job. Both admitted that continuing their work during the pandemic was stressful in the beginning, but since then they’ve fallen into a routine.

‘Personality’ of the district

Mowry said the school year has been “chaos.” He and his crew have experienced a “tremendous” amount of additional work due to the virus and many have collected overtime hours.

One of the key difficulties he mentioned was when students were in the elementary they would attend “special classes.” These are lessons that involve music, art or physical education and see classrooms different groups of students throughout the day. Every half hour to 45 minutes a custodian would disinfect the special rooms, Mowry said.

Increased responsibilities and the COVID-19 situation have caused him stress as well. He worries every time another case is reported in the school. To date neither custodial crew has had any issues with ordering supplies and reported that district leaders have been supportive.

At Westmont, Mowry and other custodial staff have had bi-monthly meetings with Superintendent Thomas Mitchell to talk about supplies and protocols. “Rob has been great,” Mitchell said. The school leader spoke fondly about the custodial staff and the hard work they’ve been putting in during the pandemic. He described them as “part of the personality of the school district.” “They contribute so much to the experience of our students,” Mitchell said.

In addition to routine tasks and extra cleaning, custodians also have to deal with yearly winter activities, such as plowing snow and completing other seasonal upkeep. Mowry has a similar attitude about that as he does for the increased workload. “We’ll figure it out,” he said. “It is what it is.”